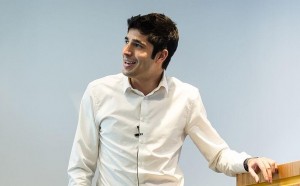 After graduating from Carolina in the spring of 2005 I started my Ph.D. in Economics at the University of California at San Diego. I chose UCSD in part based on a conversation I had with Professor Gary Biglaiser.  I had asked if we could discuss my grad school options and even though I had never taken a class from him, he generously obliged, embodying the Carolina spirit I recall fondly. The next time I saw Gary was nine years later at a conference in Vienna but didn’t find the chance to thank him (perhaps fearing he would not remember!), so I hope he reads this.

The first year of an economics Ph.D. is an intense blitz of micro, macro and econometrics, taught at a substantially higher level than typical undergraduate classes. My Carolina coursework had me well prepared, in particular the econometrics sequence I took with John Stewart and the senior thesis class overseen by Stanley Black. Courses I had taken in the Mathematics Department also proved enormously useful.

I completed my Ph.D. in 2010 and went on the full academic job market, interviewing for Assistant Professor positions all over the world. I ended up opting for a researcher position at Yahoo Research, an industry research lab in Sunnyvale, CA, where I pursued academic-style work with an applied focus. In particular, this required shifting from my focus in behavioral economics to the emerging field of “Economics and Computation.”

I moved to Microsoft Research in 2012 and spent three years in our New York City lab. Today I am Senior Researcher and Technical Advisor to our Chief Economist at Microsoft headquarters in Seattle. My papers have been published in prestigious economics journals such as the Quarterly Journal of Economics, the Journal of Economic Perspectives and the Journal of Public Economics. This work has been covered in the popular press in outlets such as the New York Times, the Wall Street Journal and the Atlantic. I have given invited lectures at universities such as UC Berkeley, Cornell, Princeton and U. Chicago. Internally, I am our lead economist on cloud computing and have presented work to the highest levels of management, including a spirited exchange with then-CEO Steve Ballmer.

So ten years on from the graduation ceremony in Gardner Hall, I find myself deeper in the economics game than I ever could have imagined (it seems half my friends on Facebook are econ professors!). While this might sound terrifying to some, if not most, I love it. I am deeply grateful to the start I got at Carolina. The small class sizes allowed me to engage with professors and go beyond the required material. These relationships in turn allowed me to apply to graduate school with strong letters of recommendation and having taken the right classes from both inside and outside the department. When you are at Carolina, it is easy to take these things for granted, but I assure you they are all-too-rare and should be taken advantage of to the fullest extent.