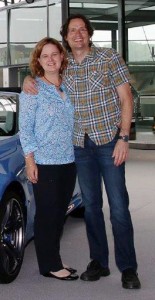 Jennie Ellison ’89 of Charlotte, N.C., fondly credits Carolina for providing her with the resources she needs to think critically every day at Microsoft as the global release manager for Office Client Services. Her ability to work through complex resource and project management problems is tied back to her success as an undergraduate economics major at UNC.

“Carolina is more than a single major,” Ellison said. “I grew up in a small town and Carolina allowed me to spread my wings as a person.” The classes and lessons she learned during her undergraduate career in Chapel Hill continue to impact Ellison’s life. “Classes I took in art history gelled later when I was given the opportunity to go to Europe for work and see some of the places I saw only as slides in Hanes Art Center. Productions in PlayMakers for drama class gave me an appreciation for the theatre,” she said. “The general college aspect allowed me the time to figure out what my passions were.”

Some of Ellison’s interests included sailing as a part of club sports as an undergraduate and today competing in half-ironman races and marathons. She is also passionate about giving back to Carolina.

When Ellison saw reports that the economics department faced extensive budget cuts, she wanted to help the department that made such an impact in her professional and personal life. She said, “I loved my econ professors and my computer science classes.” She asked the Arts and Sciences Foundation how she could help.

Ellison created the Jennifer Langfahl Ellison Excellence Fund in 2014 to support the department that gave her so much and to help ensure that it will be able to provide the same education to students for years to come. The department used the Ellison Excellence Fund to support the recruitment and research of Jonathan Williams. Williams, an assistant professor who earned his Ph.D. in economics from the University of Virginia in 2009, primarily studies the strategic choices made by firms. He has earned a national reputation for his study of competition among airlines for passengers, uncovering both the strategy behind airline seat pricing and the deterrent effect on competition of investment in gates at busy airports. Recently, he’s turned his attention to the competitive activities of residential broadband networks. He not only conducts world-changing research, but also explains the work so clearly to students in his classes that they too are on the cutting edge of industrial strategy.

Patrick Conway, chair of the department, said, “We are extremely grateful to Ms. Ellison for her support. The Ellison Excellence Fund is invaluable in giving our department the flexibility to compete with our peer institutions in attracting and retaining superior faculty members.”

Since her graduation, Jennie has been committed to supporting her alma mater. She said, “I wanted to give back to the place that provided me with the opportunity to be the person I am now.”