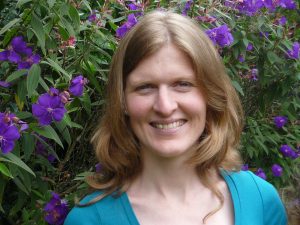 Emma Richardson came to Chapel Hill in 1997 as a Morehead Scholar from Canada.  She rapidly settled on two areas of specialization:  economics and international studies.   In Gardner Hall that translated into studies in international economics and economic development.  She graduated in 2001 with highest honors in both majors.  After a year of travel, she earned a Masters degree from the London School of Economics (LSE), and then spent eight years in United Nations program manager positions in Central America.

Today, she is a professor in the Department of Health Research at McMaster University and lives in Toronto.  She serves as a consultant to the United Nations Staff College, presenting strategic training sessions for government officials and civil-society representatives on global health issues.  She is also a senior research associate of the Li Ka Shing Institute of St. Michael’s Hospital in Toronto, managing their research on community engagement in global health and development.

This all seems a long way from Gardner Hall, but Emma insists she uses her lessons in Economics every day. As she put it, “I conduct political economy of health research in Guatemala, about access of indigenous rural women to family planning.  Having an understanding of the basics of economics is invaluable for me to be able to understand the political, economic and social policies that are at the root of why women are able to access (or not) family planning and influence how many children they have.”

She didn’t have an immediate use for her Economics degree once she left Chapel Hill.  “My first jobs after Carolina were as a waitress and picking strawberries and the like while on a gap year in Australia!  After that year I went on to study my Masters at LSE in the United Kingdom.  My economics background gave me the courage to take the very tough “Development Economics” course at the LSE, which really helped me synthesize my development economics learning from undergrad, and then land my first job with the United Nations in Central America.”

Despite her excellent record at Chapel Hill, in looking back she did have one regret.  “I wish I had taken econometrics.  For some reason I was intimidated by how difficult it might have been, despite being strong in mathematics.  I later wished I had practice at building econometric models as this would have been helpful for more confidently and independently pursuing quantitative research and analysis throughout my career.”

Emma has some surprising memories of Gardner Hall.  In her words, “I can remember sitting in Dr. Conway’s development economics class and learning about the Aral Sea case study.  This kind of applied learning had not been common in my other classes at UNC but I try to emulate this now as a professor.”

Now that she is back in Canada, she is impressed by how many people know about UNC.  There are two reasons for that:  “In the academic world people seem to know of UNC as being a strong school for public health, which had not been on my radar during my time studying in Chapel Hill.  They also all know that Vince Carter came from Chapel Hill before making our entire city of Toronto passionate about basketball and our Toronto Raptors.”