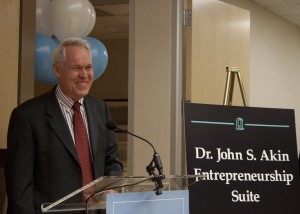 In June 2014, after over 40 years of service to the Department of Economics, Distinguished Professor John S. Akin retired. His retirement, however, was short lived. Within days of stepping down he came out of retirement to take the position of Interim Director of the Entrepreneurship Minor (affectionately known as the E-Minor). Akin was in China for his last work-related activity with the E-Minor when he received a phone call asking him if he would consider taking the position. “I was there with the E-Minor and I knew when I returned that my retirement would begin. I had myself in a frame of mind that when I returned from China I was going to be a retired person. My thoughts during those days were about what am I going to do as a retired person — and all of a sudden I’m not retired.”

The previous director, Professor John Stewart, stepped down in June 2014. The faculty member chosen to lead the E-Minor suddenly left the university. Akin saw the need for a steady hand: “I took the position because they needed me. They didn’t have anybody who had administrative experience in running this program.” This was typical modesty from Akin; he was the perfect person for the job. He had been a leader of the Entrepreneurship movement on campus for a decade, and had the administrative experience as chair of the Economics Department from 2001 to 2010.

Akin’s work with the E-Minor was recently celebrated when the E-Minor named its newly renovated section of Gardner Hall the “Dr. John S. Akin Entrepreneurship Suite.” Akin was taken off-guard by the recognition. “Those of us involved with this program love it. We support it not just for our students, but for us and for our relationship to the university. It’s had a huge impact. It’s something to be proud of and it’s nice to be honored by this program. It was nice for me personally to close out my career doing something that I really love and it was really important to the university and to the students and the department.”

We’re all very grateful to John Akin for his tireless support of the Economics Department and the E-Minor. We’re not so sure, however, about this “close out my career” business; we’re hoping he’ll be active in leading or advising the E-Minor for many years to come.