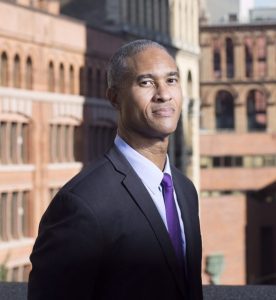 October 12 is University Day.  It is the one day each year that we remember UNC’s roots as the first public university.  On that day we also recognize alumni and alumnae of the University who have made distinguished contributions to our state, our country and the world.

This year the University will recognize Peter Blair Henry, 1991 BA in Economics, for his many contributions to the understanding of the workings of international financial markets and the international macroeconomy.  Peter began at Carolina as an Economics major and a reserve tight end for the football team.  (He was also a finalist in the annual slam-dunk contest.)  He went from Chapel Hill to Oxford, UK as a Rhodes Scholar, and then on to the Massachusetts Institute of Technology for a Ph.D. in Economics in 1997.

In addition to his many publications in Economics journals, his 2013 book “TURNAROUND: Third World Lessons for First World Growth” describes the economic principles associated with international economic success.  He argues that the secret to emerging countries’ success (and to the future prosperity of the developed world as well) is discipline–a sustained commitment to a pragmatic growth strategy.