How would you reduce the national debt (as a share of gross domestic product) by 10 percentage points in 10 years?

The Economics Department asked this question of our undergraduates on campus in  September 2013.  We also invited them to put together a team to devise a plan, and to submit a proposal.  The proposals were rated by a jury of experts, and the top four teams were asked to make oral presentations of their proposal in a public forum.  The jury of experts will then rank the proposals, and the top three teams received cash awards of $500, $250 and $100.  This was an extracurricular event organized by Professor Michael Aguilar and Danny Soques, one of our graduate students, and it was just the sort of challenge to motivate our best students.

Nine teams submitted budget proposals. The four final teams presented their budget plans and fielded questions from a public audience and a panel of judges in November 2013.   Among the judges was Ryan Schoenike of The Can Kicks Back, a Washington DC non-profit with a goal of fostering public education on debt-related matters.   The winning team included Brian Bartholomew, Danny Hogenkamp, Nick Neuteufel and Ryan Rosenberg. 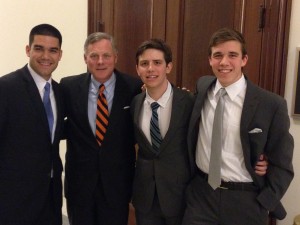 The winners received their cash prizes, but had an additional payoff — they were sponsored by The Can Kicks Back to go to Washington DC to present their proposals to members of Congress and their staffs.  (In the picture above, Danny Soques and Senator Richard Burr of North Carolina pose with Nick Neuteufel and Dashiell Mace, the captains of the top two teams.)

This was such a success that Michael and Danny are expanding its scope.  The Fiscal Challenge will be a national competition, with the final round taking place in Washington DC.   Carolina students will have an inside edge, of course — not only are they superior economists, but they’ve been through the competition once already!