Jonathan Pingle came to Chapel Hill in the fall of 1998.  He was a bright guy — undergraduate degree at University of Connecticut, graduate courses in accounting and a Masters in Public Policy at the University of Chicago — but he hadn’t quite found that life-defining challenge.  The graduate program in Economics here at UNC was just what he was looking for. 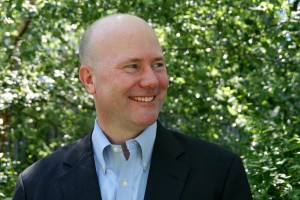 He specialized in applied micro analysis at Carolina, with fields in labor and econometrics.  His Ph.D. dissertation was a set of three essays on the welfare system in the US.  He completed that in 2003, and then accepted a job on the staff of the Research Department of the Board of Governors of the Federal Reserve System in Washington DC.  After a productive career at the Board of Governors, he’s recently moved to head up the research office of the Fixed Income division of BlackRock, the world’s largest publicly traded investment management firm.

So what exactly does he do?  As Jonathan puts it, “My role is to support fixed income portfolio managers with economic analysis, including thinking about the outlook, the structure of the economy, and economic and monetary policy, and not just the U.S.”  He had the benefit while at the Board of Governors of a large cadre of like-minded researchers, and he finds the same at BlackRock:  “The most enjoyable part of the job has been engaging people in interesting and constructive discussions about the economy and monetary policy.”

Carolina prepared him well for his current position.  When asked what skills he’d kept with him from his graduate-student days, he said “The econometrics training is the most obviously useful preparation–both because I use it all the time, but also because it helps evaluate the quality and usefulness of other research results.  The macroeconomics courses were useful and provided a base for learning further at the Federal Reserve.  The background in labor economics has been very useful.  It may be the field of economics that touches and overlaps the most with others, with its own econometric rigor, micro modeling, and macroeconomic importance.”  In his current job, he’s “the data guy”.  That’s something he honed in Chapel Hill.

The biggest challenge these days is the commute.  He lives in Maryland and travels to and from New York most days.  That can be a blessing, though:  “Trading floors are busy.  A couple of hours on a train just to read can be unusually productive.”

The greatest pearl of wisdom from the faculty at Carolina?  Jonathan remembers Wilbert VanderKlaauw musing that “graduate work and the intellectual experience could be the greatest time in your life if it wasn’t for the small details of qualifying examinations, writing and defending the dissertation, and finding a job.”  Jonathan has shown that the intellectual experience stays with you through the years, even after the small details are far behind.