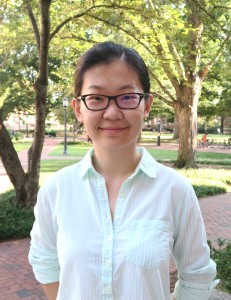 current graduate student in Economics at Carolina, has been named the Gallman Graduate Scholar in Economics for 2015-2016.

Robert Gallman was a nationally recognized researcher on American economic history and a professor of Economics at Carolina from 1962 to 1998.  He was named the Kenan Distinguished Professor of Economics in 1980, and served the Department as chair during the period 1990-1995.  He was president of both the Southern Economic Association and the Economic History Association during his long and distinguished career, and trained generations of Carolina graduate students in the techniques of quantitative economic history.  Paul Rhode, Professor of Economics at the University of Michigan and a long-time colleague of Robert here at Carolina, described him as follows:  “Robert Gallman was everything a scholar should be — a tireless researcher, an insightful observer, and a wonderful storyteller.  But even more impressive was how supportive Bob always was of his students.  They could have no better mentor.”  It is fitting, given his devotion to graduate-student success, that we remember him with this scholarship.

The Gallman Graduate Scholarship is made possible by private contributions from his many admirers.  Graduate students  in the dissertation-preparation stage of their studies at Carolina are eligible to apply, and those with the most creative proposals are considered for this support.

Ning’s research project is entitled “When the Honeymoon is Over:  the Effect of Family Structure on Child Cognitive Achievement”.  She is investigating the effect of disruptions in the family (divorce, marriage, deaths of parents or siblings) on the child’s academic achievement.  Her adviser is Professor Donna Gilleskie.