Skip to main content
Economics Department
Home / Graduation / Graduation 2015: A Partnership made in the Southern Part of Heaven

We honor all of our graduates 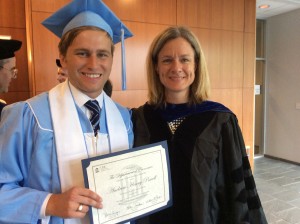 at Commencement, but this year we sent out a large thank-you as well.  Andrew Powell (at left in photo) graduated in May with a degree in Economics as well as a Minor in Entrepreneurship.  He was a busy man on campus during his four years; he assisted Professor Buck Goldstein in Economics 125 (Introduction to Entrepreneurship) as a junior, and served as Student Body President at Carolina during his senior year.  He’s best remembered in Gardner Hall, though, for his fruitful partnership with Professor Rita Balaban (at right in photo) in her redesign of her Economics 101 course.

Professor Balaban has taught Economics 101 for many years, and is recognized as a “not to miss” instructor for the course.  She taught it four years ago when Andrew was a first-year student.  He was impressed enough, but as she put it:

“Andrew came in to see me about a year after he’d completed Economics 101.  He and some of his friends, who were also ECON majors, had a shared interest in education and technology, specifically how online content could be leveraged to improve residential education.  As they read more about education and innovation, they kept seeing studies and articles about the effectiveness of ‘flipped classrooms’.  They did their research and saw that several professors across campus were redesigning their large-lecture courses to the flipped format, but to their disappointment, the innovation was not being implemented in any ECON courses.  Later Andrew told me that they thought it would be fun to work with me, so they came to my office and asked me if I would flip ECON 101.”

Professor Balaban had been very effective as an instructor, but she was intrigued:  could this make Economics 101 even better?  She agreed to give it a try, under one condition — that Andrew assist her in that reboot.

The rest, as they say, is history.  Andrew and Neel Patel, another of this year’s graduates, along with 2013 graduate Jason Dunn, collaborated with Professor Balaban to redesign Econ 101.  They received financial and technical support from the Center for Faculty Excellence at UNC, but the hard work was all theirs.  Professor Balaban has taught the “rebooted” course now for four semesters, and she’s seeing greater student learning success.  The students have shown their approval as well; she was nominated for and received a Tanner Teaching Award this year.

No teaching awards for Andrew — at least not yet.  After completing his degree, he set off to become the “Head of Learning Innovation” for African Leadership University in Mauritius. We wish him well, and send our deepest thanks for being an agent of change in Gardner Hall.