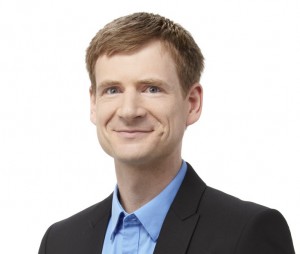 Simon Alder joined the faculty this summer as an assistant professor and Kaufman Family Global Fellow.  His main research interests are growth and development, regional economics, trade, and political economy.  In his work on development and infrastructure in India, Simon uses a general equilibrium trade framework to compare the effects of a highway project which connects the four largest

economic centers of India with a counterfactual network design based on the Chinese approach of connecting intermediate sized cities.  He finds that connecting the major centers leads to a greater but more unequally distributed growth.  Following the Chinese strategy would yield more equally distributed effects which would benefit in particular the lagging regions of India.

Simon received his Masters and PhD in economics from the University of Zurich.  His teaching interests are in macroeconomics and economic development and he will teach a course in development at the undergraduate level in Spring 2015.  Although he was born and formally educated in Switzerland, Simon did spend one year in the United States as an exchange student.  He is excited to be at Carolina and says that UNC provides an “excellent environment for research”. He was quick to complement the faculty mentoring system as well.  In his spare time, Simon enjoys outdoor activities such as hiking and cycling. Ju Hyun Kim joined the faculty this summer as an assistant professor.  His research interests include identification and inference in causal inference models and structural microeconomic models. In his dissertation, Ju Hyun studies identification of distributional parameters such as the distribution of treatment effects (DTE), the joint distribution of potential outcomes, and heterogeneous sharing rules in collective models. In his work on the DTE, Ju Hyun considers two conditions: fixed marginal distributions and support restrictions on the potential outcomes including monotone treatment response. To establish informative bounds on the DTE, he formulates the problem as an optimal linear transportation program and incorporates support restrictions into the cost function using a Lagrange multiplier approach.

Ju Hyun is a native of South Korea and did his undergraduate work at Seoul National University. He earned his Masters and PhD from Columbia University. He is currently teaching econometrics at the undergraduate (ECON 570) and graduate (ECON 870) level. Having lived in large metropolitan areas all his life, Ju Hyun describes Chapel Hill as very green and safe. He enjoys listening to classical music and playing the pipe organ during church services. He has been doing the latter for about 10 years and has played in both Seoul and New York City churches.

Michelle Sheran-Andrews joins us as a lecturer after 13 years at our sister institution, the University of North Carolina at Greensboro, where she won Teaching Excellence Awards from the Bryan School of Business and Economics in 2005, 2009, and 2014 and from the Student Government Association in 2010.  Michelle is an experienced teacher and researcher in microeconomics, economic statistics and labor economics.  Her early research focused on public programs for needy families and on women’s joint career and family decisions.  In recent years, she has been particularly interested in the role of assessment in the learning process as a means of integrating core content across the curriculum. She has presented her work at conferences in Wilmington and Greensboro.

Michelle was born and raised in the suburbs of Philadelphia, but spent most of her high school years living in Mexico City. She did her undergraduate studies at the University of Richmond and received her PhD in Economics from the University of Virginia. She has been really impressed with our undergraduates and said that the students have been welcoming. “I already see how rewarding they are to work with. So far, I have had a very positive experience.” Michelle, her husband, and two children currently reside in Greensboro, but they plan to move to Chapel Hill in the near future. Valentin Verdier’s research interests are in microeconometrics and empirical microeconomics. His dissertation was concerned with the estimation of different models of panel data, particularly models when covariates are not strictly exogenous, i.e. when there is feedback between the dependent variable and one or more explanatory variables. He is currently interested in the estimation of social interactions with panel data. Applications of his work in econometrics include the study of the effect of private school attendance on student achievement and the study of the adoption of agricultural technologies in developing countries.

Valentin is from France and received a dual undergraduate degree in economics from the University of Lyon and the University of Delaware. He received his PhD in Economics from Michigan State University in May 2014 and he will be teaching both undergraduate- and graduate-level econometrics in Spring 2015. Valentin spent the Fall 2014 semester as a visitor in the Department of Economics at UC-Berkeley. He enjoys hiking and fishing in his free time.